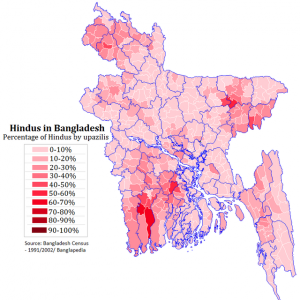 Hinduism is the second largest religious affiliation in Bangladesh, covering more than 8.2% of the population, according to the Bangladesh Bureau of Statistics. In terms of population, Bangladesh is the third largest Hindu state in the world after India and Nepal.

In nature, Bangladeshi Hinduism closely resembles the forms and customs of Hinduism practised in the neighbouring Indian state of West Bengal, with which Bangladesh (at one time known as East Bengal) was united until the partition of India in 1947. 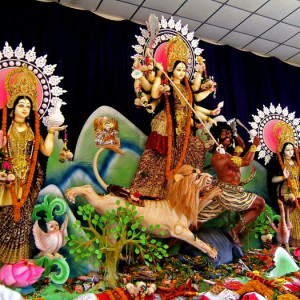 The Goddess (Devi) – usually venerated as Durga or Kali – is widely revered, often alongside her consort Shiva. The worship of Shiva has generally found adherents among the higher castes in Bangladesh. Worship of Vishnu (typically in the form of his Avatars or incarnation Rama or Krishna) more explicitly cuts across caste lines by teaching the fundamental oneness of humankind in spirit. Vishnu worship in Bengal expresses the union of the male and female principles in a tradition of love and devotion. This form of Hindu belief and the Sufi tradition of Islam have influenced and interacted with each other in Bengal. Both were popular mystical movements emphasizing the personal relationship of religious leader and disciple instead of the dry stereotypes of the brahmins or the ulama. As in Bengali Islamic practice, worship of Vishnu frequently occurs in a small devotional society (shomaj). Both use the language of earthly love to express communion with the divine. In both traditions, the Bengali language is the vehicle of a large corpus of mystical literature of great beauty and emotional impact.

In Bangladeshi Hinduism ritual bathing, vows, and pilgrimages to sacred rivers, mountains, and shrines are common practice. An ordinary Hindu will worship at the shrines of Muslim pirs, without being concerned with the religion to which that place is supposed to be affiliated. Hindus revere many holy men and ascetics conspicuous for their bodily mortifications. Some believe that they attain spiritual benefit merely by looking at a great holy man.

The principle of ahimsa is expressed in almost universally observed rules against eating beef. By no means are all Bangladeshi Hindus vegetarians, but abstinence from all kinds of meat is regarded as a “higher” virtue. Brahmin (Bram-mon) or “Upper-caste” Bangladeshi Hindus, unlike their counterparts elsewhere in South Asia, ordinarily eat fish and chicken. This is similar to the Indian state of West Bengal, which has a similar climate to that of Bangladesh where Hindus also consume fish.